Will Bayley, the reigning World Champion and World Ranked Number One Table Tennis (C7) player, has signed to be represented by 17 Sports Management, the company co founded by Hannah Cockroft in 2014.

Will (28) from Tunbridge Wells was born with arthrogryposis, a rare congenital disorder that affected all four of his limbs, he underwent numerous operations at Great Ormond Street Hospital from the age of three months old. At the age of seven Will returned to Great Ormond Street for chemotherapy when he was diagnosed with Non-Hodgkins Lymphoma. It was while recovering from cancer that his grandmother bought him his first table tennis table, which started Will on his sporting journey. 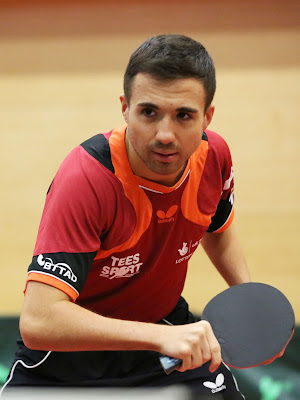 Will represented Paralympics GB in the 2008 Beijing Paralympics and then went on to win individual silver and team bronze medals at the London 2012 Games. Will first became the World Number One ranked player in 2012.

"We are excited to welcome Will to the team and are very pleased to be working with him" said 17 Sports Management Director Ian Byers. "Will had a number of opportunities to sign with other companies and we are delighted that he chose 17 to represent his interests. Will is a special talent and we will work closely with him and his coaching team to manage his career, maintaining the correct balance at all times between his training, competition, commercial and media activities. Nothing will be allowed to disrupt his preparation for Rio, where he has a real chance of winning a gold medal".

Co founder of 17 Management, Hannah Cockroft MBE said "I am delighted to welcome Will to the team, I look forward to working with him and sharing experiences on our journey to Rio and beyond".

Will said, "I am pleased to join the team at 17 Management, I have been impressed with the work that they have done with a number of my friends and team mates. I like their way of working and I know that they will always have my best interests at heart".

17 Sports Management, represent the interests of a number of disabled and able bodied sports people, from up and coming talent to World Champions. More information on the company and the athletes represented can be found at www.17management.com
Watch out for Will's new website coming soon; www.willbayleygb.com

You can follow Will on Twitter @WillBayleytt
#TableTennis #WorldChampion #TeamGB #Supercharge #Rio #London2012 #Beijing
Posted by Unknown at 14:08