Jordanne and Yui, the 2014 and 2015 champions, played Dutch second seeds Jiske Griffioen and Aniek van Koot in the Ladies Doubles Final, the pairs know each other very well having met in the last four Wimbledon finals. Unlike previous years the final was a relatively easy affair with Jordanne and Yui winning four games in a row in the first set and five games in a row in the second set to close out a 6-2, 6-2 victory, in just 69 minutes. 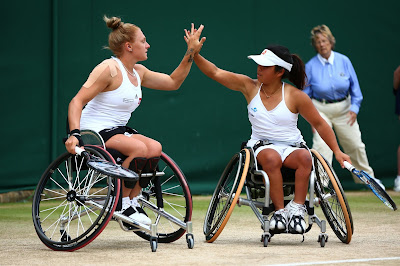 “We’re both in a bit of shock if I’m honest,” said Jordanne. “We never thought we could win three in a row as Jiske and Aniek are so strong but today I really felt like we played the best tennis at a Grand Slam. This, I consider, to be 'the slam.' Everyone wants to win Wimbledon. For me, it's my home. To win at Wimbledon is so special and the crowd today were brilliant. We just love being on court with each other. Yui is always happy. I can be quite an emotional rollercoaster. It's nice for me to have someone on the court who you know every single day, they're smiling and laughing."

The result was something of a consolation for Jordanne who had lost to van Koot in the women's singles semi-final earlier in the week.
Find out more about Jordanne via her website www.jordannewhiley.com
Follow Jordanne on Twitter @jordannejoyce92
Posted by Unknown at 21:58