Hannah on sprinting in Switzerland and breaking two World Records

Sunday saw the last day of the Swiss Nationals and the last day of competition out in Switzerland. We started with the 200m in the morning, and I was feeling pretty ready to go with more perfect racing conditions. I won the race, just off the PB time I had set just a week before.

4 hours later, we lined up for the 800m, and by this point, the sun was beating down and everyone was well past tired. The boys had all finished racing for the day, so it was lovely to see them still at track side, supporting their team! We pushed on.... Another tactical race, that I decided to try and keep clear of, so I took the pull from the start, aiming for a faster time than those we had previously recorded over the series. There was nothing to save energy for now, so I thought I may as well use up what I had left in the tank! No one really challenged me for the pull and the girls were more than happy to sit behind and let me do the work, up until the sprint finish. I managed to finish in a seasons best time, and finally take my world lead back! So we finished on a high and a race that I was very happy with! 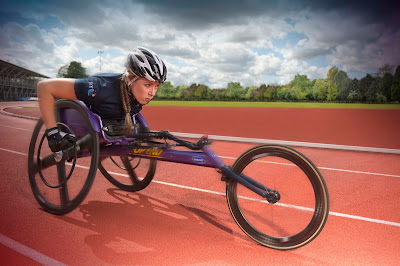 After packing up and three hours sleep, we were back on the plane and on our way home. Big thanks to 17 Sports Management Limited for getting me to the airport in time on the way out and for picking me up on the way back, it was far easier than challenging the tubes with my luggage and on such little sleep!

Considering that I didn't feel 100% ready before we set out to Switzerland, I am SO pleased to have broken 2 world records, taken a world lead and of course, retained my unbeaten title whilst out there.

Also, a BIG well done to the British Athletics Wheelchair Racing team for such an incredibly successful series. Between us, 2 world records were broken, 3 (I think?) European Records were broken and countless PBs fell from almost every racer. A big thanks must also go to coaches Jenni Banks, Job King and Ian Mirfin and of course Dave the physio, for keeping ourselves and our chairs in one piece and for putting up with us all for the 10 days!

Now, I have four more days in the UK, before we fly out to America to compete in the US Nationals and the Fast Cow meet. So, we're hitting it hard in training to make sure I can go faster out there!
Follow me on Twitter @HCDream2012