Telford judoka Kelly Edwards (24), won a bronze medal in the Casablanca African Judo Open at the weekend. Kelly who represented Team GB at the London 2012 Olympics and won a silver medal in the Glasgow Commonwealth Games, competed in the Under 52kg category in Morocco, winning three of her four fights against top level international opposition.

Kelly, a member of the Wrekin Star Club who trains at the British Judo Centre of Excellence in Walsall said; "I'm really happy to have won a bronze medal at the African Judo Open. It was a tough, long day and it was particularly challenging as I had to compete without a coach present, which puts me at a distinct disadvantage. As I have to self fund my competitions I could not afford for him to come". 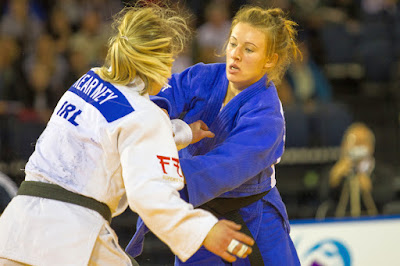 Kelly added "This medal is for everyone who has helped and supported me, the coaches and support team at the Centre of Excellence and my personal coach Gareth Mapp. I would particularly like to thank the Telford AGA shop for their financial support which enabled me to be able to fund and compete this weekend".

"These international competitions are incredibly important for me to gain further experience and accumulate Olympic Games qualifying points, which I need to be able to achieve, to represent Team GB in the Rio Olympics next year". "It would be great if I could get a sponsor or two to help me meet my training, competition and travel costs, so that I can realise my full potential”. If anyone is interested in sponsoring Kelly, she can be contacted through her website www.kellyedwardsgb.com