Wheelchair speedster Hannah Cockroft MBE flew to Doha this week looking for glory at her third consecutive World Championships, which take place between 22 and 31 October.

It's quite fitting that the athlete studying journalism will have plenty to write about when her racing days are done.

Even as it stands, the 23-year-old is a double Paralympic gold medallist and quadruple world champion – quite a feat for the Halifax-born lass who grew up in the hamlet of Mount Tabor – fit with its gold post box to commemorate one of her London 2012 medals.

Yet Cockroft continually stresses her desire to remember her roots with the city of Leeds majorly important in the Paralympian’s success story which, in truth, has only just begun. Never mind Rio 2016 or Tokyo 2020, at just 23 years of age even the 2024 Paralympics could be on the long-term agenda.

Hannah has become the female face of wheelchair racing after a sensational five years that has seen her bag eight golds at Paralympics, Worlds or Europeans. But the former Calderdale College pupil can well remember her humble roots joining Leeds City Athletics Club as a teenager to be coached by Paul Moseley. These days, Team GB are responsible for the athlete’s coaching which this year has been geared around this month’s World Championships where Cockroft will bid for three golds in the 100m, 400m and 800m T34 class.

A single gold would act as automatic qualification for Rio and Cockroft heads to Doha as a reigning champion having savoured victory in both the 100m and 200m at the last two World Championships in Christchurch and Lyon, though she now faces a new challenge with organisers shelving the 200m event for the 800m contest. With the Yorkshire ace also tackling the new 400m, three gold medals could be on their way back to Mount Tabor.

Rest assured Cockroft will be showcasing any future glories in Leeds, a city the Paralympian says has been integral to her transformation to sporting stardom.

Taking time out of her busy schedule before jetting out to Doha, Cockroft told the Yorkshire Evening Post; “I’m a member of Leeds City Athletic club and I’ve been there at least seven years and Leeds has been really important to me.

“I had my coach here when I started, I still come and train with the group here when I’m around and it’s nice to come back and have someone who remembers who you were before all the glory and still kind of treats you as that person. They are real friends there, they are real people and if ever for some God forsaken reason everything went wrong they would still be here and I’d fall back on them and they’d still catch me and help me. It’s nice just to have that little safety net there. 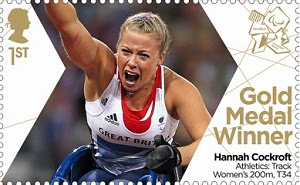 “It’s such an odd thing to think about because so much has happened since then and you don’t want to hang on past glories. But it was just such a momentous occasion that I’ll always live off it and you can see the change in it by just how many competitors are coming through. It’s just amazing.

“After London I came back to Leeds City Athletic Club where I trained before London to show them my gold medal and when we trained here there were maybe four or five us who trained together. “But I came back and there were old people, young people, people my age, everyone, about 20 people trying out wheelchair racing and I think that is just a pure show of legacy. That is what it is all about – showing people that you might have a disability but actually you can do whatever you want.

“It’s great and I do see that still every day, there’s so many youngsters that have come through since London that are now world champions, world record holders. It’s amazing and it just shows that actually all these people were sat at home thinking they couldn’t do things when actually they had just raw talent inside of them.”

Cockroft was that person when watching the Beijing 2012 Games. Four years later, she was one of London’s heros and it would take a brave man to predict anything but another gold rush at Rio this time next year.

Yet Cockroft actually faces a new challenge in adapting to new distances, a new dimension that the 23-year-old is relishing. Cockroft explained: “We’ve got two new events this year because they have replaced the 200m with an 800m and they added an extra 400m earlier this year. So it’s a great opportunity to have to go to these championships – it’s exciting and it kind of gives me a chance to show that I can do more than put my head down and race in a straight line and I can think about what I’m doing while I’m doing it.

“It is a challenge and it’s going to be tough because the rest of the world is catching up very quickly. But that’s nice, it’s nice to kind of go out there and show people that there is competition now and it is going to be exciting to watch.

“I’m doing the 100m, the 400m and the 800m – instead of the 200m – so I guess I’m going for a hat-trick! Fingers crossed that’s the plan. “But it seems scary, I think I am racing six days out of the 10 days’ competition so I know it’s going to be really tough and something totally new to handle. “But I like a challenge!”

The Doha heat adds another aspect to the size of the task – temperatures are set to reach 37 degrees centigrade tomorrow – and Cockroft admitted: “It’s not going to be who is the fittest and healthiest and fastest, it’s going to be who is handling the heat best. I went out in February as that’s where we had our first race of the season and it was just something else. You really can’t recreate that, it’s horrible!”

Perhaps, then, Cockroft will be happy to learn that four months of snow are forecast on her return to Yorkshire where the athlete will remain based between now and Rio while she takes a gap year in her degree in journalism at Coventry University. First stop after Doha will be mum and dad Rachel and Graham’s house in Mount Tabor but the Cockrofts are an international family with brothers Joshua and Daniel living in Finland and Pennsylvania respectively and long term the air miles will continue to soar. Cockroft laughed: “I’ve recently moved back home to Halifax and it’s nice to be home. It’s nice to be back where my mum can cook my dinner and dad can wash my car!”

Cockroft, though, will remain in the fast lane, admitting even after a glut of medals there is still so much more to achieve.

Assessing how long she might continue, Cockroft reasoned: “For me it’s a tough thing to call because my disability doesn’t have a diagnosis so we don’t know how things are going to impact on it, how it’s going to get worse or get better. There’s a lot of unanswered questions. My plan is to make it to Tokyo 2020. I’d love to see how I feel then and it depends where hosts the 2024 Games. If it’s a country I’d like to visit then maybe we can hold on a bit longer.

“Obviously the Olympics is the pinnacle of every athlete’s career but I haven’t had the chance to race at a Commonwealth Games so I’d love a chance to do that. “There’s still everything to aim for and everything to race for. And I’m having fun with it so let’s carry it on.”
Courtesy of The Yorkshire Evening Post.
Follow Hannah on Twitter @HCDream2012
www.hannahcockroft.co.uk
#Rio2016 #Doha2015 #London2012 #Gold #Champion #Athletics
Posted by Unknown at 17:55