Wheelchair racer Ben Rowlings (19) had an incredible weekend at the IPC Grand Prix in Nottwil, Switzerland, breaking an astounding four T34 British records. Ben, who is coached by Job King, powered to lifetime bests over 100m, 200m, 400m and 800m. The 19 year old posted a four second personal best over 800m finishing in 1:46.50 while he shaved over half a second off in the 400m crossing the line in 54.52. There were also marginal improvements over both sprint distances for the multiple British record holder finishing the 100m and 200m in 16.74 and 29.07 respectively. 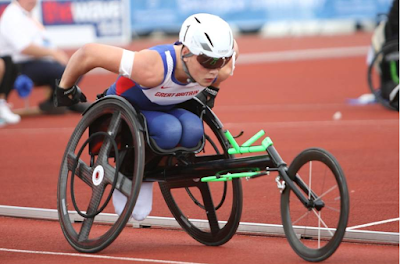 “I’m really happy to break the British records” said Ben, “I knew that I was in good shape but it’s good when it all comes together”. “I know though that I have more inside me and I look forward to going faster” he added.

Ben competes in another two race meetings in Switzerland before the IPC Grand Prix in Italy between 12 and 14 June. "These international competitions are important for me to gain further experience and give myself the best chance of being selected for Team GB in the World Championships in Doha in October and the Paralympic Games in Rio in 2016” said Ben. “Whilst I am lucky enough to have some great sponsors which help fund my racing, it would be wonderful if I could get another sponsor or two to help me meet my training, competition and travel costs, so that I can realise my full potential”.