Wheelchair tennis star Jordanne Whiley MBE had a double reason to celebrate this weekend. Not only did Jordanne win her first ever Super Series Singles title at Nottingham, but she was also confirmed as the World Number One Doubles player when the International Tennis Federation rankings were announced.

“It still hasn’t sunk in yet that I won the British Open tournament and now I am confirmed as the world number one in doubles,” Whiley said. "It is a dream come true to be recognised as the best doubles player in the world. It was always going to be difficult to achieve as I have shared a lot of my success with Yui (Kamiji) but it proves that I can excel without playing with her too". She added "now I am number one in doubles, I'm aiming to become World Number One in singles too". 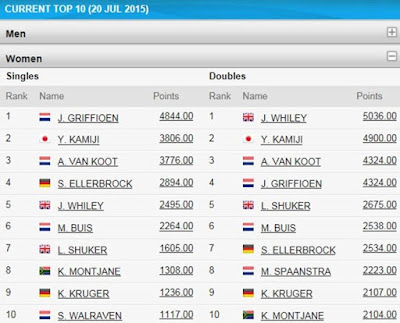 Jordanne and her regular doubles partner Japan's Yui Kamiji have won six Grand Slam titles together, their most recent being at Wimbledon last week. This week however in Nottingham, Jordanne played with her London 2012 Bronze medal winning partner Lucy Shuker, as part of the pair's preparation for the Rio 2016 Paralympic Games.

Jordanne's win in Nottingham has moved her up to Number five in the World singles rankings. Talking about her win she said "I proved to myself and other players that I’m a contender for the singles and leading up to Rio next year a contender for gold as well". 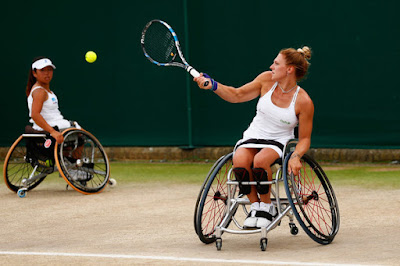 "The week could not have gone any better" said Jordanne, "I have had a lot of great reaction and media coverage of my recent success; it has certainly helped to raise the profile of wheelchair tennis". She added, "I just hope that some companies will be inspired by what I have achieved and would like to get involved commercially. The players and tournaments would benefit from sponsorship and I know that personally I have a lot that I could offer any potential sponsor, who wanted to partner with me".

It's certainly been quite a week for Jordanne, winning a Wimbledon doubles title, her first major singles title and now confirmed as a World Number One. Finding a sponsor or two would make it perfect.
Follow Jordanne on Twitter @jordannejoyce92
www.jordannewhiley.com
#WheelchairTennis #Tennis #Wimbledon #Rankings #Rio2016 #Sponsorship