What a week for Jordanne

What a week for Jordanne Whiley. After retaining her Wimbledon doubles title on Sunday, Jordanne took part in numerous media requests and attended the Champions Ball, before heading to Nottingham on Monday afternoon for the British Open tournament. After a practice on Tuesday, Jordanne was back in action on Wednesday.
Here is how the week went for the Wimbledon champion.

First up was a singles match as Jordanne defeated Michaela Spaanstra 7-5, 6-2 in straight sets. “It wasn’t the greatest match I’ve ever played but I got through it in two sets,” said Jordanne. “I’m a bit tired after being on the grass all week at Wimbledon and coming back onto a different surface takes a little bit of adjustment. It’s hard coming back down to reality after Wimbledon and all the celebrations after winning the doubles but I’m pleased that I got through it,” she added. 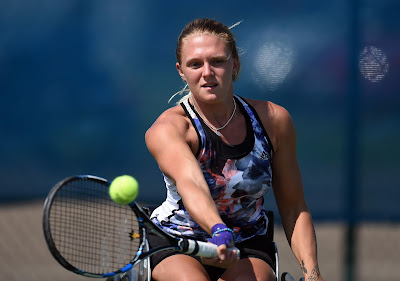 On Thursday, Jordanne had a far tougher match coming from a set down to beat world No.4 Sabine Ellerbrock 4-6, 6-2, 6-4 to make her third Super Series semi-final of 2015. Jordanne the world No.6 will play world No.1 Jiske Griffioen in the last four after Griffioen beat her fellow Dutchwoman Marjolein Buis 6-1, 6-1.

"I didn’t start off very well at all and then I got it back towards the end of the first set, but that was a bit too late,” said Jordanne. “I carried it on in the second, had a blip, but then came back and was pretty solid.” On facing world No.1 Griffioen in the semi-finals she said: “I just need to play intelligent tennis rather than go out there and powerhouse everything. She is beatable even though she is a quality tennis player and has really good shots. I believe in myself and believe that I can beat her."

Jordanne then paired up with her London 2012 bronze medal doubles partner Lucy Shuker, to play against her Wimbledon partner Yui Kamiji, progressing easily to the semi-final 6-0, 6-2.

On Friday, Jordanne achieved her best ever singles result, reaching her first Super Series singles final as she ended the 20-match winning streak of Dutch top seed and World No.1 Jiske Griffioen 2-6, 6-3, 6-4 amid blustery conditions. This win earns Jordanne a match against world No.3 Aniek van Koot in Saturday’s final after van Koot won the other semi-final against world No. 2 Yui Kamiji 7-6(3), 6-2. 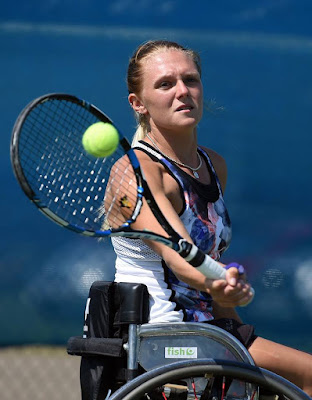 "I was in so much disbelief and so happy that burst into tears and couldn’t breathe. I just couldn’t believe that I just took out the world No. 1, who has a seven month winning streak. And I’ve made my first ever Super Series final – it’s just amazing,” said Jordanne.

“Because I couldn’t hit the ball very hard today and couldn’t serve like I usually do, it turned into an advantage because she couldn’t handle the slow balls. Also, it made me think about, ‘okay I can’t hit it hard so I need to place the ball exactly where I want it to go. That is something that won me the match.”

“If I can take out the world No.1, then I can take out anyone. I’m definitely up for the challenge now,” added five-time Grand Slam doubles champion Whiley ahead of her first singles final at the highest tier of wheelchair tennis tournament outside of the four majors.

After an exhausting and euphoric Singles Semi Final win it was perhaps inevitable that Jordanne and Lucy would lose in the Doubles Semi Final, going down 6-2, 6-3 against Montjane and Ellerbrock.

Saturday's British Open Singles Final against World No. 3 Aniek van Koot, gave Jordanne the perfect opportunity to bury the ghost of last years Masters Semi Final defeat and she did so in style, winning 4-6, 6-3, 6-4, to claim her first ever Super Series Singles title, one of the sport’s six most important tournaments outside of the Grand Slams.


﻿
“It hasn’t sunk in yet. I’m used to just being a quarter or semi-finalist at Super Series events like this and now I’m here on finals day and I’ve just won the tournament,” Whiley said.

“Today I hope I proved to myself and other players that I’m a contender for the singles and leading up to Rio next year a contender for gold as well. For so long I’ve been wanting to prove myself in singles but it hasn’t quite worked out,” added Jordanne.

“I’ve gained a lot of confidence from this tournament but I’ve also learnt a lot about myself and my game to take into the US open. I really pushed myself. I'm not in the best form, I've said that all week, and I think that is what makes it a little more special, because when I am on form imagine what I can do. I’m so grateful to all my team that helps me to prepare for and achieve results such as this."

And there is more good news, by our calculation (unconfirmed), following the British Open, Jordanne will move up to Number One in the World, when the new ITF Doubles rankings are announced next week.
It's certainly been quite a week!
Follow Jordanne on Twitter @jordannejoyce92
www.jordannewhiley.com
#Wimbledon #BritishOpen #Nottingham #WheelchairTennis #NumberOne
Posted by Unknown at 18:22